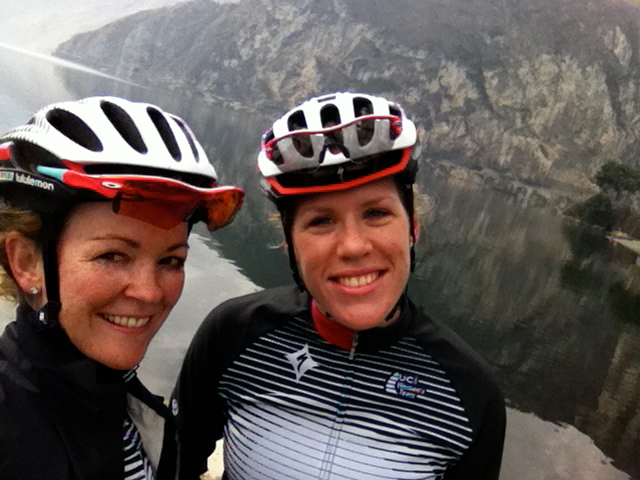 In the team, the riders are always getting all the attention; from media, sponsors and -above all- from our staff. But from who is our staff getting any attention? Ok, Jens, Ronny & Kristy get their minute of fame sometimes in race reports and press releases, but what about our soigneur and mechanic? Beth & Olli (or Oliver for outsiders) are their names in case you didn’t know. Our workhorses who are busy 24h a day, always making sure our bodies and bikes are in topshape. Never complaining and nothing you ask is too much. If they were on Strava I would give them ‘kudos’ every day. In team Specialized lululemon we are blessed with our staff and although I know they don’t like it, they deserve to be more in the spotlights!

Last week I got some extra attention from Beth. I have a kneeinjury and because the staff is always there at the moments you need them, Beth was there. Beth temporarily turned from a nice physio in a very strict policewoman. She told me I was allowed to ride for half an hour a day on a wattage her 8 year old niece would ride on. According to Beth, this was only 100W. Thank god her niece turned 9 last week and after a couple of days I was allowed to ride on 150W. By asking if I please could ride 1h instead of 30min her exact answer was:
‘NO.
NO=NO.
N.O. means NO Ellen!
30 minutes and no minute longer.’

You might think of Beth as a fearful woman by now, and I can tell you; she was by that time! I didn’t dare to ride for 31min, scared she might check my SRM files. But when I came to Italy at the end of the week I got permission from the policewoman to race, which gave our relationship a boost. Happy to be able to finish the race, I began to realise Beth might have given me the only approach that would work for me.

Today an easy ride was on the schedule to test if my knee was recovered from the race. Beth –who thinks she’s unfit, but who looks fitter than me- joined me for our lap around the lake. I wasn’t allowed to go over 150W anyway, was her theory. When Trixi asked Beth at the start if she was really going to ride with me, she wished Beth good luck and gave her an extra bar. I guess certain Germans have some bad training experiences with me and this had it’s effect on Beth nerves.

So there we went. Me being scared Beth would see I might push 160W and Beth being scared to not be able to keep up with me. After half an hour we entered a 1,6km dark tunnel. So dark that taking off your oakley didn’t help and all we could do is keep riding straight while hoping the tunnel wouldn’t make a turn. I took the front position and ‘accidentily’ rode a whole bit faster than my 150W target. Beth followed me without a comment. After we survived the first tunnel another two dark tunnels of respectively 2,1 and 2,5 km followed and this made me ride faster and faster. While I was thinking what a shame it was I didn’t have connection with the sattelites in the tunnel (which means I wouldn’t be able to make a Strava segment of my effort later on) I almost forgot about Beth. I didn’t hear anything from behind and was afraid I might have dropped my little policewoman in the dark tunnel. But when I looked back I could see something moving which must have been Beth. While I was getting out of breath and wondering how long this tunnel would go on for, I found it pretty annoying I couldn’t even hear her gasping for air. Coming out of the tunnel I could see my heartrate of 170bpm and finally heared Beth. Not her breath, but just her calm voice saying we had to check if we were still on the right route. While we stopped she looked at me and asked: ‘That wasn’t 150W, right?’ I thought it would be better to be honest with her, cause I know how painful her massage can be. So I said ‘NO’.

And than we started laughing. Laughing because we were both relieved. We survived the tunnels, my knee did ok above 150W and Beth could follow me without even putting an effort in. Luckily, we discovered Beth’s great fitness just in time. Because we were still looking for a 6th rider to complete our world cup squad on Sunday. And maybe as a rider, Beth would finally get the attention she deserves!