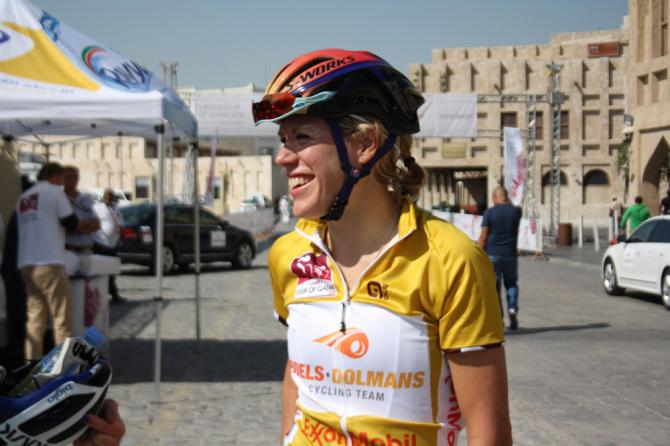 Boels Dolmans rider says attempt will have to wait until 2016

Ellen van Dijk (Boels Dolmans) has added an Hour Record attempt to her ‘wish-list ‘of ambitions but has told Cyclingnews that any bid will have to wait until 2016 at the earliest.

Van Dijk, a former world time trial champion, is currently racing at the Ladies Tour of Qatar, and has planned an almost full season of road racing for 2015. It means any attempt on the women’s Hour Record - currently held by Leontien Zijlaard-van Moorsel with a distance of 46.065k – will be not feature in her short-terms plans.

“I don’t see time for it right now but it’s still on my wish-list,” van Dijk told Cyclingnews. “I would still like to do the Hour Record attempt but not right now. It’s not in my plans for the very near future but maybe 2016 or a year after, but there aren’t any clear plans yet. “I’ve done quite a bit of research into it but you can see that it’s not easy. Look at Jack Bobridge for example because a lot of people felt like he could crush the record but it’s not that easy. It’s not something you can tackle with just a couple of week’s work. You need to be fully prepared and have a structured plan.”

Sarah Storey will attempt the Hour Record later this month at Revolution track event in London. It will mark the first attempt any athlete has made on Zijlaard-van Moorsel since 2003. The UCI’s recent relaxation on the technical specifics surrounding the Hour Record has already seen a flurry of activity in the men’s discipline.

However, van Dijk believes that any attempt on the current women’s record will need meticulous planning and preparation. “I think it takes at least a couple of months of planning and preparation and it’s something you need to take really seriously. You have to go through an awful lot of pain and you need to train for that sort intensity as well. It’s a lot different from road racing,” she added. “You can look at time triallists and from there pick the top five or six from the Worlds and go from there. Then you have Sarah Storey who is going for the record at the end of the month, and I think that she has a good chance with the new regulations in place because the record that van m set is just fabulous and so fast. It’s beatable but it’s not something you can underestimate.”